Biohuts of Sant Feliu already contribute to the regeneration of biodiversity

One year after the installation of 15 biohuts under three jetties in the port of Sant Feliu de Guíxols, it has been proven that these artificial habitats for fry fish are contributing to the regeneration of marine biodiversity. The results of this first year of the project were announced on Thursday at the stand held by Ports de la Generalitat de Catalunya at the 60th Barcelona Boat Show.

The annual inspection to monitor it ecologically has been carried out by a team of professional divers from the companies Ecocean, Sublímits, Piscis Diving and the Club Nàutic Sant Feliu de Guíxols.

The review began with a visual inspection of the outside of drawers, pontoons and the wall inside the contradictory by a biologist to know the biological state of the environment.

Next, two biohuts of water sample wrapped in a mesh were extracted to protect the species to collect total life that is encrypted inside, which was deposited in aquariums. 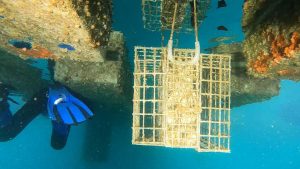 Both out of the water and during the dive, numerous Limariahians have been detected, four species of shrimp, crabs, platyhelminthes, nudibranchia, trypterygion and other fish that have been recorded in a careful inventory. Once the inventory and sorting were completed, the drawers were reassembled and placed back under the jetties along with all the life that had been extracted for their study to ensure their survival.

The technical report of the inspection determines that in these widgets installed under the docks of the port there are currently 363 individuals of 14 different species: 64 arthropods, 280 mollusks, 8 annelids, 8 platihelmints, 3 osteoicts and 27 fish.

The Sant Feliu de Guíxols Yacht Club was the first port in Spain to install biohuts to protect junior fish from their predators. It is a project promoted by the French company Ecocean that aims to bring artificial habitat adapted to ports in order to take advantage of these infrastructures in aquatic and marine ecosystems and provide the key functions of breeding habitats: shelter and food resource.

This website uses cookies to improve your experience while you navigate through the website. Out of these, the cookies that are categorized as necessary are stored on your browser as they are essential for the working of basic functionalities of the website. We also use third-party cookies that help us analyze and understand how you use this website. These cookies will be stored in your browser only with your consent. You also have the option to opt-out of these cookies. But opting out of some of these cookies may affect your browsing experience.
Functional
Functional cookies help to perform certain functionalities like sharing the content of the website on social media platforms, collect feedbacks, and other third-party features.
Performance
Performance cookies are used to understand and analyze the key performance indexes of the website which helps in delivering a better user experience for the visitors.
Analytics
Analytical cookies are used to understand how visitors interact with the website. These cookies help provide information on metrics the number of visitors, bounce rate, traffic source, etc.
Advertisement
Advertisement cookies are used to provide visitors with relevant ads and marketing campaigns. These cookies track visitors across websites and collect information to provide customized ads.
Others
Other uncategorized cookies are those that are being analyzed and have not been classified into a category as yet.
Necessary
Necessary cookies are absolutely essential for the website to function properly. These cookies ensure basic functionalities and security features of the website, anonymously.
SAVE & ACCEPT
Powered by