The Club Nàutic Sant Feliu de Guíxols (CNSFG) has hosted the ILCA Master Spanish Championship in the ILCA 6 and ILCA 7 classes, which took place from September 15 to 18 with 47 participants, including several international and 4 Olympians.

In ILCA 7, with 13 participants, the first place on the podium went to Leandro Rosado from the Real Club Náutico de Barcelona, the silver for José Luís Doreste from the Port d’Aro Yacht Club and the bronze for Lorenzo Carretelli from the Punta Ala Yacht Club.

This edition of the championship stands out for its great technical organization, the good weather conditions that have been especially on Sunday and that has allowed sailors to make three extraordinary regattas and the good atmosphere that has occurred between the athletes and the entire team of the Sant Feliu de Guíxols Yacht Club.

The manager of the CNSFG, Maribel Vela, considers that “once again Sant Feliu de Guíxols proves to have the optimal characteristics both organizational and destination for the practice of sailing to carry out regattas of the highest level”. In fact, so much is the tradition of sailing at the CNSFG ganxó, which is currently one of the clubs with the most ILCA class sailors in Catalonia. 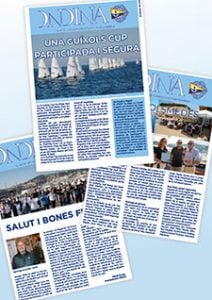